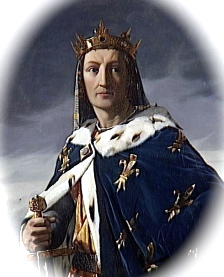 In L﻿ouis IX of France were united the qualities of a just and upright sovereign, a fearless warrior, and a saint. He lived for the welfare of his subjects and the glory of God. Louis was born in Poissy, France on 25 April 1215 to King Louis VIII, of the Capet line, and Blanche of Castile, daughter of King Alfonso of Castile and Eleanor of England. His father died when he was just eleven years old, and he was crowned -- at Rheims, like almost all French Kings -- on the First Sunday of Advent in 1226. His very strong and pious mother acted as his regent, suppressing various revolts to secure her son's place. She acted as regent even after he reached the age of majority, and guided his career with strong Christian advice, forming his character in holiness. Much of his virtue is attributed to his mother's care, for the Queen devoted herself to her children's education. Blanche's primary concern was to implant in him a deep regard and awe for everything related to religion. She would say to him, "Never forget that sin is the only great evil in the world. No mother could love her son more than I love you. But I would rather see you lying dead at my feet than know that you had offended God by one mortal sin" -- sentiments that he took to heart and would later pass on to his own son. (see below)

One of his first acts as king was to build the famous monastery of Royaumont, with funds left for the purpose by his father. Louis gave encouragement to the religious orders, installing the Carthusians in the palace of Vauvert in Paris, and assisting his mother in founding the convent of Maubuisson.

Louis loved sermons, heard two Masses daily, and was surrounded, even while traveling, with priests chanting the hours. He forbade all forms of usury and protected vassals and tenants from cruel lords. In 1244, Louis announced his long-cherished intention of undertaking a crusade to the East. At first he was successful capturing the port city of Damietta, at the mouth of the Nile. Six months later in a battle with the Saracens at Mansourah his forces were defeated and he was captured. After length negotiations he and his fellow prisoners were released. Louis, with the remnant of his army, sailed to the Syrian coast and remained in that region until he return to France in 1254.

He was a great patron of learning, the arts, and architecture, and under his patronage, the famous college of theology, the Sorbonne was founded; abbeys built; and the chapel of Ste. Chapelle. This the beautiful chapel with the walls of stained glass that sits on the tiny Ile de la Cité right in the middle of Paris, in the Seine River (the same island where Notre Dame Cathedral is found). This chapel was built to house a part of the Crown of Thorns and a piece of the True Cross, which he purchased from Emperor Baldwin II in Constantinople, and it became St. Louis's personal royal chapel.

Louis was very dedicated to the cause of peace, he not only arbitrated and made treaties with Henry VIII and James I of Aragon (The Peace of Paris), but did much to curb a lot of the petty, feudal warfare that caused so much harm. He was most famous for his charity, humility, and concern for the poor. He built many hospitals, among them the hospital known as "Quinze-vingt" ("Fifteen-Twenty") -- a hospital for the blind and whose name comes from the fact that it could care for 300 patients. He also received destitute people daily and saw that they were fed; in Lent and Advent he cared for all who came, often waiting on them in person. He had a passion for justice, and changed the "King's court" of his ancestors into a popular court, where he listened to any of his subjects who came with grievances and gave what seemed to them wise and impartial judgments. The feudal method of settling disputes by combat he tried to replace by peaceful arbitration or the judicial process of trial, with the presentation of testimony. In later times, whenever the French complained of oppression, their cry was for justice to be meted out impartially, as it had been in the reign of St. Louis.

In 1270, he went off on another Crusade, this time in an attempt to convert the Emir of Tunis after being inspired by acting as godfather to a Jewish convert. Again, his Crusade failed, and again he became sick with dysentery. This time, though, he did not recover. He died on 25 August 1270. His last words were those of Christ: "Into Thy hands I commend my spirit." He was canonized in 1297, 27 years after his death. 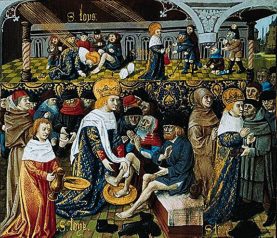 Therefore, dear son, the first thing I advise is that you fix your whole heart upon God, and love Him with all your strength, for without this no one can be saved or be of any worth.

You should, with all your strength, shun everything, which you believe to be displeasing to Him. And you ought especially to be resolved not to commit mortal sin, no matter what may happen and should permit all your limbs to be hewn off, and suffer every manner of torment, rather than fall knowingly into mortal sin.

If our Lord send you any adversity, whether illness or other in good patience, and thank Him for it, thing, you should receive it in good patience and be thankful for it, for you ought to believe that He will cause everything to turn out for your good; and likewise you should think that you have well merited it, and more also, should He will it, because you have loved Him but little, and served Him but little, and have done many things contrary to His will.

If our Lord send you any prosperity, either health of body or other thing you ought to thank Him humbly for it, and you ought to be careful that you are not the worse for it, either through pride or anything else, for it is a very great sin to fight against our Lord with His gifts.

In conclusion, dear son, I give you all the blessings which a good and tender father can give to a son, and I pray our Lord Jesus Christ, by His mercy, by the prayers and merits of His blessed Mother, the Virgin Mary, and of angels and archangels and of all the saints, to guard and protect you from doing anything contrary to His will, and to give you grace to do it always, so that He may be honoured and served by you. And this may He do to me as to you, by His great bounty, so that after this mortal life we may be able to be together with Him in the eternal life, and see Him, love Him, and praise Him without end. Amen. And glory, honour, and praise be to Him who is one God with the Father and the Holy Spirit; without beginning and without end. Amen.
Powered by