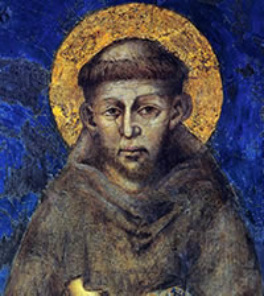 Francis lived at the turn of the 13th Century, from 1181 to 1226. It was a time of great social, economic, political and religious change. It was a time of the re-emergence of the Merchant class, the Guilds, and a whole new economic system. It was a world of the Lords and the serfs; of haves and have-nots; of the strong and the weak.

Like any young man Francis wanted to do something important in his life. His father wanted him to be a cloth merchant like himself and perhaps take over the business one day. Francis dreamed of being a Knight. His father wasn’t apposed to this for if Francis became a knight then the family would move up in social standing. But God had a different plan, a different calling for him.

In a battle between the neighbour towns of Perugia and Assisi the combatants from Assisi lost. Francis and others were captured and held for ransom. It was a year before his Father finally agreed on a ransom price and paid for his release. This imprisonment change Francis’ life. During his time in prison he began to pray for guidance from God. He continued this after his release. Often he would pray in the small churches in and around Assisi. He left his followers one of his prayers for guidance. It is referred to as the prayer before the crucifix:
﻿Most High, glorious God,
enlighten the darkness of my heart.
and give me true faith, certain hope,
and perfect charity,... sense and knowledge, Lord,
that I may carry out Your holy and true command.﻿ 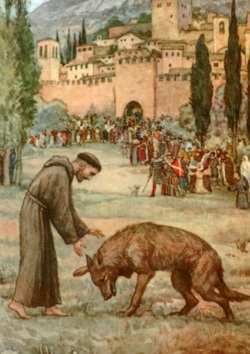 After a while others joined him. Bernard of Quintavalle, an aristocrat from the town, was the first to join Francis, and then Peter of Cattane, a well-known canon of the cathedral. So they went to the local church to seek the guidance of the Lord. They prayed and then opened the Book of the Gospels three times. This is what they found:


This shall be our rule of life," exclaimed Francis, and led his companions to the public square, where they gave away all their belongings to the poor.
When Francis had about 12 followers he wrote a rule in a few words and went to Rome to have his way of life approved by the Pope. In his Testament St Francis tells us “And after the Lord gave me brothers, no one showed me what I should do, but the Most High Himself revealed to me that I should live according to the form of the Holy Gospel. And I had this written down simply and in a few words and the Lord Pope confirmed it for me. And those who came to receive life gave to the poor everything which they were capable of possessing and they were content with one tunic, patched inside and out, with a cord and short trousers. And we had no desire for anything more”.

Even today those who wish to join the Friars are asked to sell all they have, give to the poor and come follow Christ.

There is a story that the Pope did not want to approve this way of life for Francis. He asked the friars to come back the next day and he would give his decision. Supposedly he had a dream of the Church of St. John Lateran falling down and then a poor beggar holding up the walls of the church. When he woke he realised the beggar was St Francis and approved his Rule.

To learn more about the Life of Saint Francis visit http://www.franciscanfriarstor.com/archive/stfrancis/index.htm﻿
Powered by